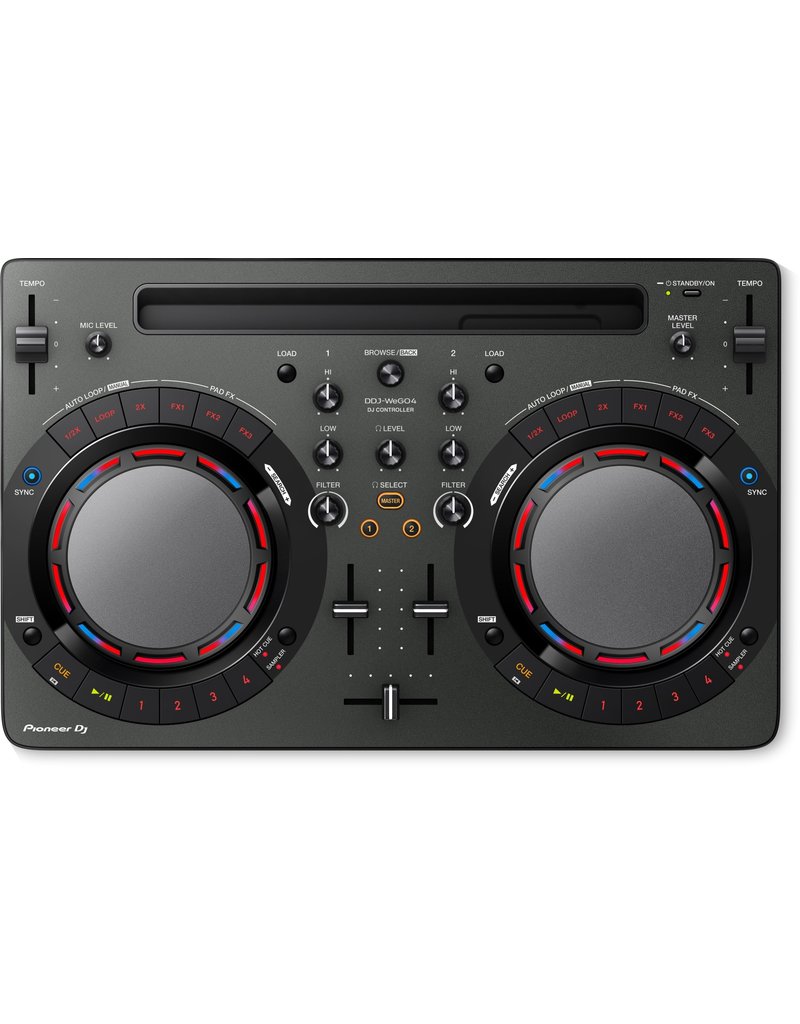 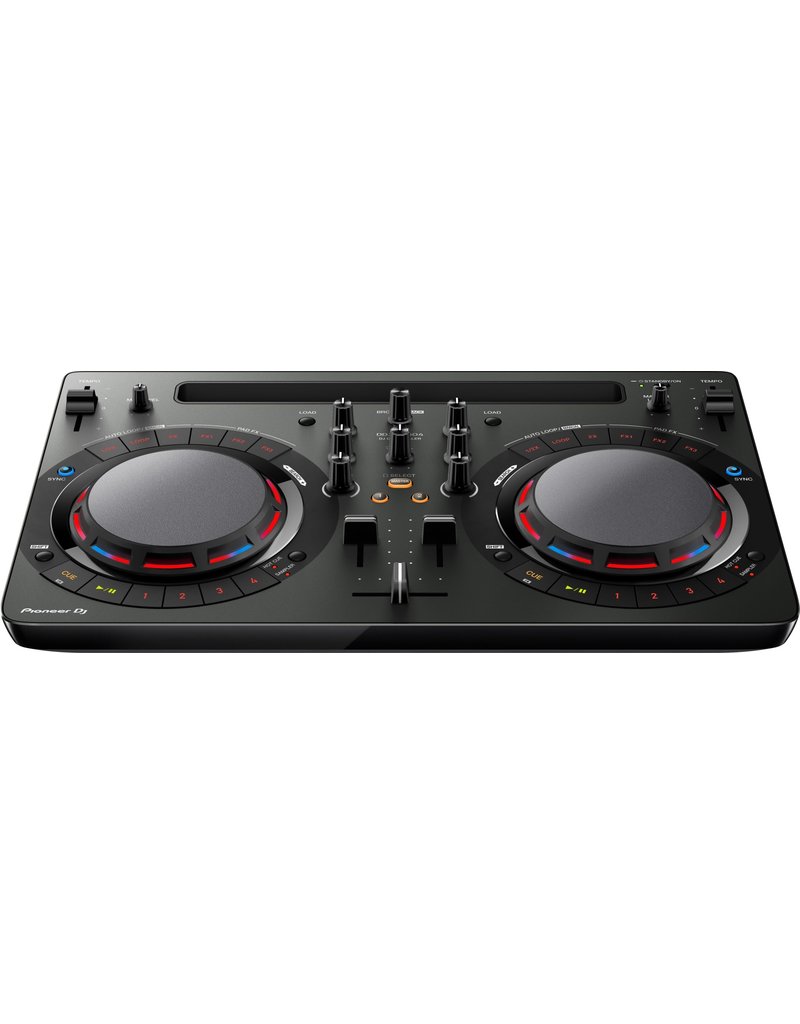 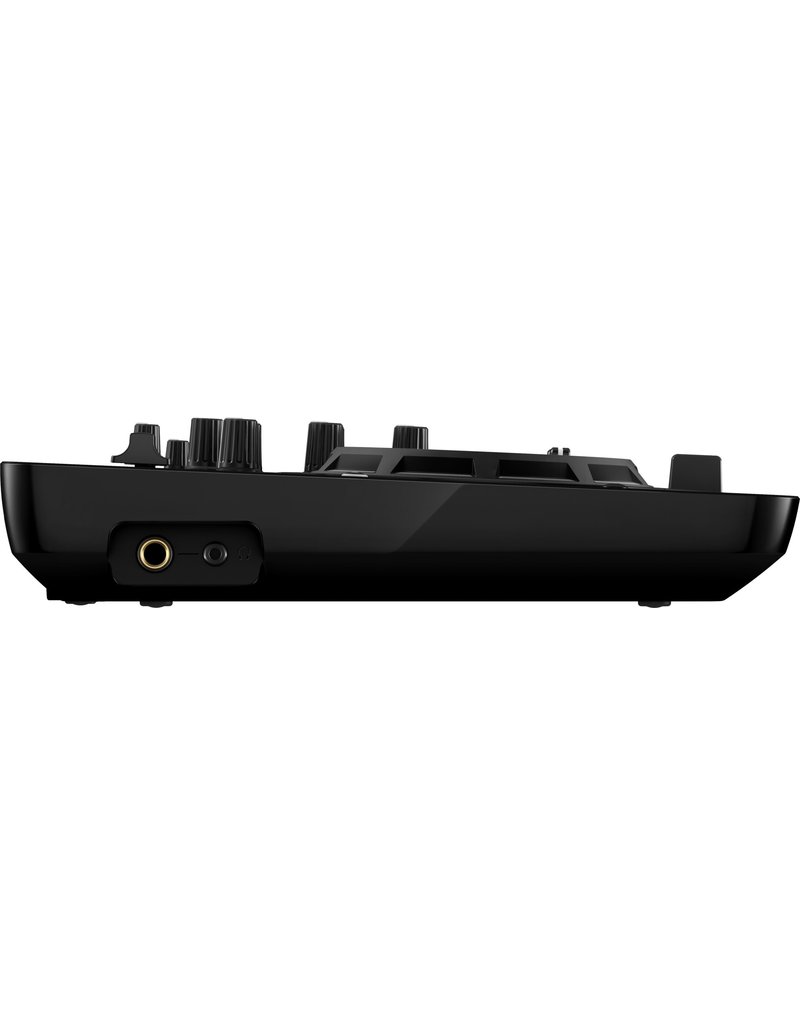 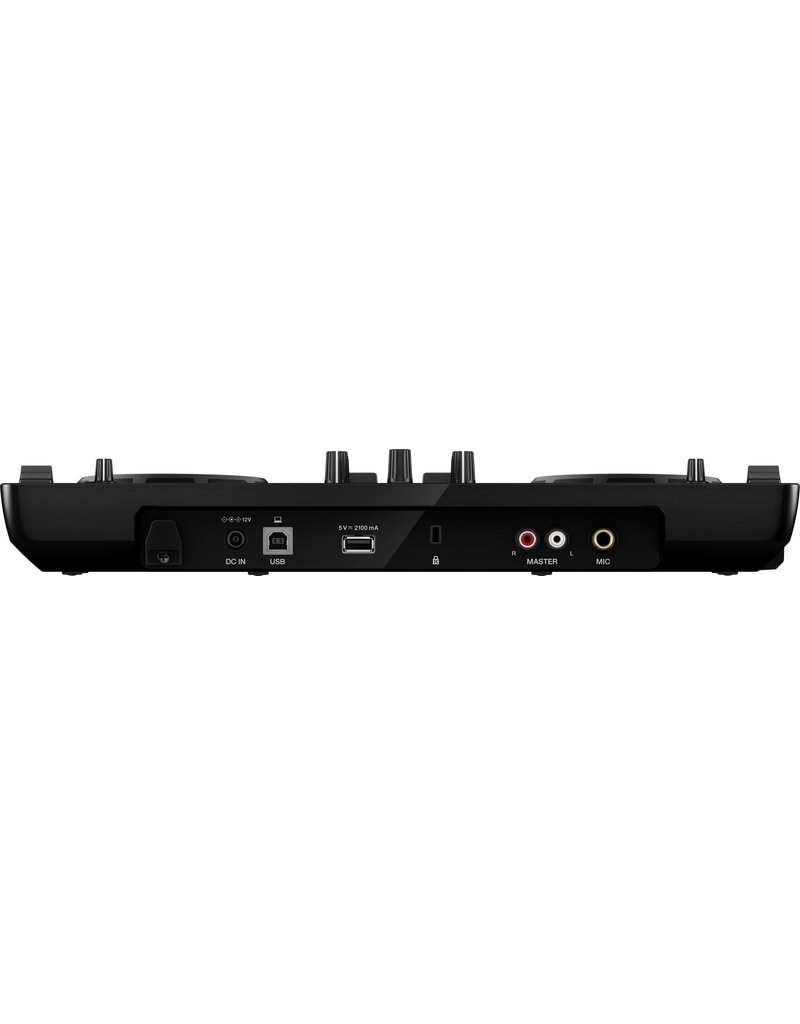 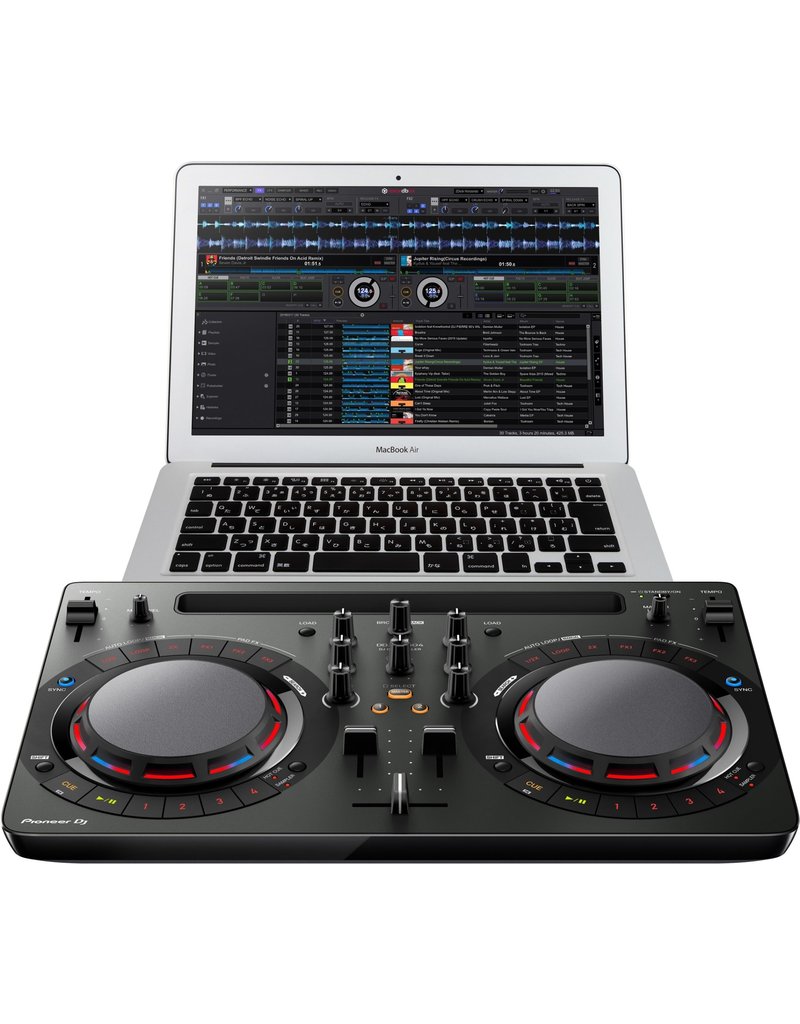 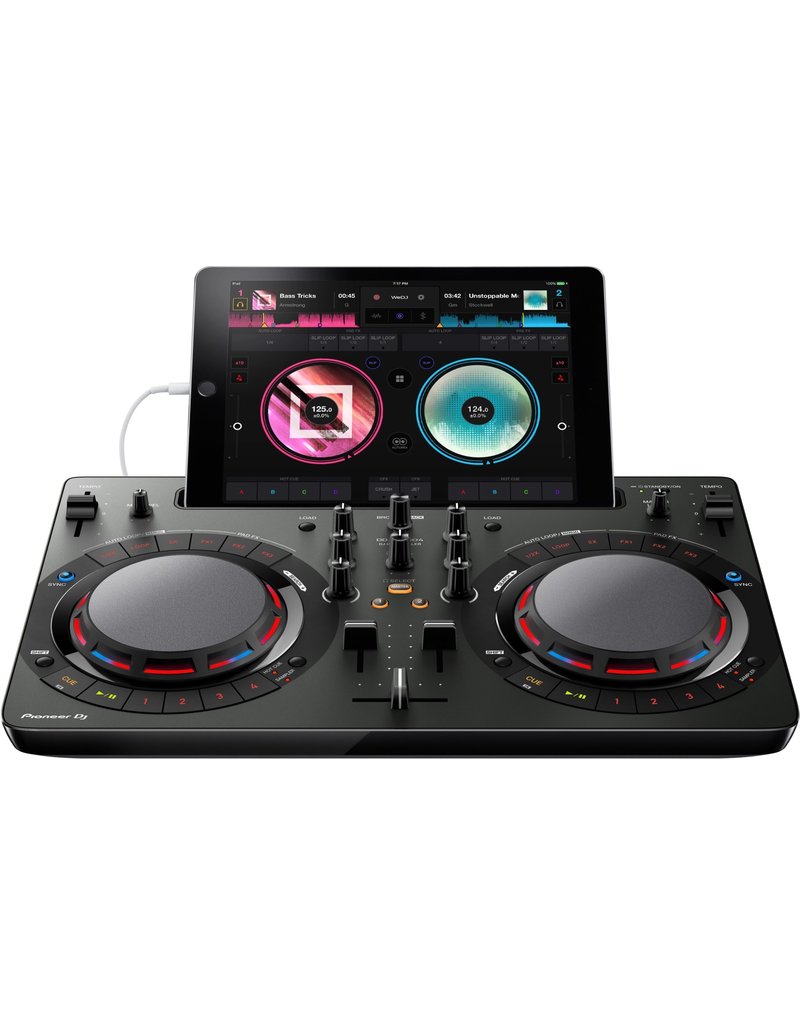 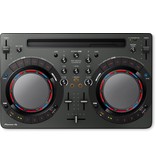 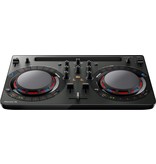 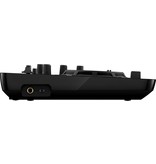 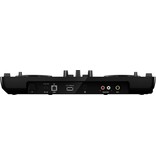 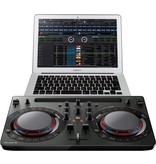 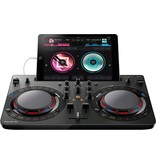 The Pioneer DJ DDJ-WeGO4 is an all-plastic two-channel controller that comes in two colours – black and white. It’s got a two-band EQ and a filter knob, along with two channel faders and a crossfader. There are two small jogwheels (think around Traktor Kontrol S4 size), each with four switchable hot cue / sampler buttons, and transport controls at the bottom. At the top of either jogwheel are loop on/off buttons with 1/2 loop and 2x loop size buttons, plus three Pad FX buttons, which are like instant effect buttons.

The DDJ-WeGO4 has RCA jacks for the Master output, a 1/4″ and an 1/8″ jack for headphones, and a USB connector for hooking up your iOS device via Lightning or your Android device via USB On-The-Go. It also has a USB jack for connecting to your laptop, and a power receptacle for the included adapter. There are knobs for the headphone cue volume, the Master output, the mic level (it has a 1/4″ mic input), and library browse. There is no headphone cue / Master knob here. At the top of the unit is a slot for docking in a smart device as large as a 9.7″ iPad.

The DDJ-WeGO4 is compatible with a number of different DJ apps in a handful of platforms – for mobile devices, it works with djay 2 on both Android and iOS, and on a laptop it’s got mappings for Rekordbox DJ, djay Pro, and Virtual DJ. New to the DDJ-WeGO4 is compatibility with Pioneer DJ’s new WeDJ software, a streamlined app for iOS that’s easy to use.

Add your review
0 stars based on 0 reviews 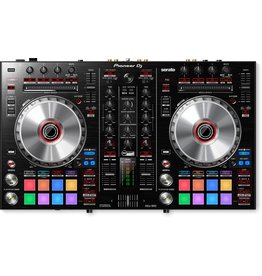 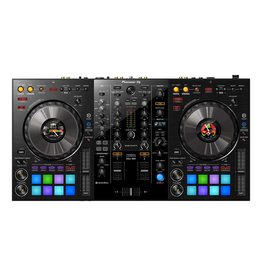 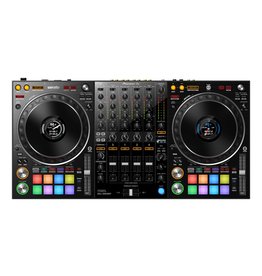 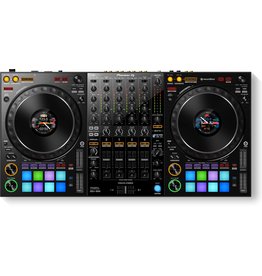 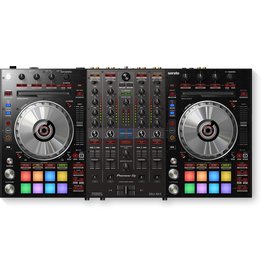 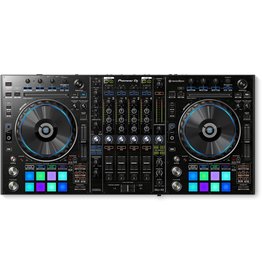 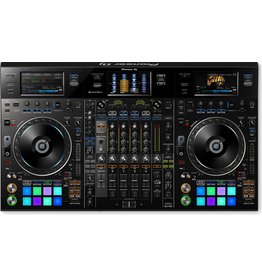 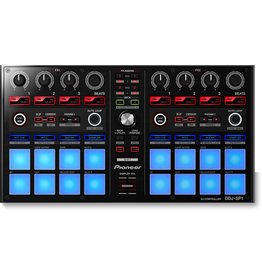 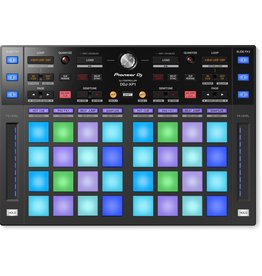 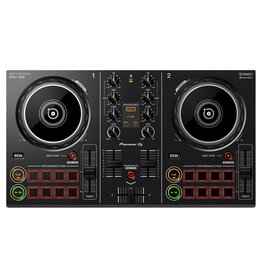